We will have 2 "official" AIA webinar talks this spring (below), but may add some more casual student presentations as well, so stay tuned to updates here and on our Facebook page!

Monday, April 12, 2021, 6pm CT:
Frances Gallart Marqués, “Terracotta Figurines from the Field to the Museum.”
Webinar is free and open to the public; co-sponsored by the Archaeological Institute of America and the University of St. Thomas Department of Art History (scroll down to “Events” to register)

Monday, April 26, 2021 at 6pm CT:
Michelle Damian, "Archaeology through Art: Early Modern Japanese Ship Construction."
Webinar is free and open to the public; co-sponsored by the Archaeological Institute of America and the University of St. Thomas Department of Art History (scroll down to “Events” to register)
Posted by AIA Minnesota at 6:03 AM No comments:

On January 3rd, the Archaeological Institute of America will kick off its 122nd Annual Meeting with Society Sunday.  Society Sunday is a special first-of-its-kind that brings together AIA members and the general public for a day of archaeological programming which includes two fantastic public events: an opening lecture and Q&A session with renowned Egyptologist Salima Ikram (1pm CST) and a panel discussion perfect for getting into archaeology while you are staying at home: Digital Archaeology for a Virtual World (4pm CST). Click here for additional information and registration links.
Posted by AIA Minnesota at 1:39 PM No comments:

The talk is free and open to the public but You must register by Noon on Thursday October 8th. Use the following link to register for the talk and we look forward to seeing you there. https://stthomas.force.com/applicantportal/USTEventRegister?instanceID=a340a0000035bJy
The discovery of the only known pigment shop in ancient Rome revealed an array of colors in their raw, mineral form waiting to be sold to wall painters. Ancient pigments provide a surprising opportunity to understand how science can be used in archaeology, revealing what pigments were present in the shop and, potentially, the source from which they originated, as well as exploring the supply-side economy of Roman painting and the steps by which these pigments went from the mine, to a shop, to the walls of a Roman house. This lecture also explores the economy of the Roman pigment trade, looking at the prices of pigments as well as the potential for their adulteration.
Posted by AIA Minnesota at 8:55 AM No comments:

Due to the current Covid-19 crisis, our April lectures are cancelled and we hope to reschedule them next year.


In the meantime, here are some options for getting your archaeology fix:
The national Archaeological Institute of America has some great resources, including Interactive Digs, the American Journal of Archaeology and Archaeology magazine. And the Minneapolis Institute of Art Vimeo site has a lot of videos, including most of our previous AIA lectures held at Mia.

Posted by AIA Minnesota at 8:46 AM No comments:

John Hale: "From Mastodon Hunters to Moundbuilders: The Peopling of North America" and "Viking Longships: Wolves of the Sea"


Friday, February 28, 2020 at 6pm: “From Mastodon Hunters to Moundbuilders: The Peopling of North America,” in the John B. Davis Lecture Hall at Macalester College
Beginning with the pioneering excavation of a prehistoric mound by Thomas Jefferson, researchers have brought to light thousands of ancient sites and artifacts that shed light on the lives – and deaths – of the first Americans.  Nomadic hunting groups first reached North America during the Ice Age, more than 10,000 years ago. They brought their dogs with them, and left behind the weapons they used to kill mastodons and other Pleistocene “megafauna”. In later millennia, these tribes began to exploit local flint deposits, explore caves and waterways, and establish settlements from the Arctic Circle all the way south to the mineral springs of Florida.  Once women had succeeded in domesticating corn, beans and squash, extensive villages were built to accommodate the booming populations. At sites like Serpent Mound in Ohio and Cahokia in Illinois, extraordinary effigy mounds and other earthworks bear witness to the beliefs and the artistic genius of these first Americans.

This event is free and open to the public; co-sponsored by the Macalester Anthropology Department and the Archaeological Institute of America

- Vikings talk is SOLD OUT: there will be first-come, first-served overflow seating in the Wells Fargo room at Mia

Saturday, February 29, 2020 at 11am: “Viking Longships: Wolves of the Sea,” in the Pillsbury Auditorium at the Minneapolis Institute of Art

Viking ships are among the most remarkable artifacts in the entire realm of archaeological discovery, dominating European history for the three centuries between 800 and 1100 AD.  As warships they terrorized coasts from Scotland to the Mediterranean; as trading craft they ventured down the rivers of Russia to Byzantium, and as vessels of exploration and colonization they crossed the open Atlantic to Ireland, Iceland, Greenland and ultimately America.  Yet all these amazing achievements were accomplished by open, undecked ships with a few oars and a single square sail.

The 19th century witnessed dramatic finds of royal Viking ships in Norwegian burial mounds along Oslo fjord.  More recently, underwater archaeologists have recovered virtually intact Viking ships from harbors in Denmark.  The most ambitious project in the field of experimental archaeology has involved the reconstruction and sea trials of many Viking ship types.  John Hale has traced the ancestry of Viking ships all the way back to sewn-plank canoes of the Scandinavian Bronze Age, and shows the links between these remarkable ships and the watercraft of the Pacific and central Africa.

This event is free but all Mia talks are now ticketed – available Jan. 29 -  - call 612-870-6323 or online; co-sponsored by the Minneapolis Institute of Art and the Archaeological Institute of America.

Dr. John R. Hale has more than 35 years of archaeological fieldwork experience and serves as Director of the Liberal Studies Program and the “Individualized Major” in the College of Arts & Sciences at the University of Louisville, Kentucky.

Posted by AIA Minnesota at 9:24 AM No comments:

Johnathan Hardy on “Wēh-Ardašīr and the Ruins of Qasr bint al-Qadi: Christian Architectural Adaptation in the Sasanian Heartland,” 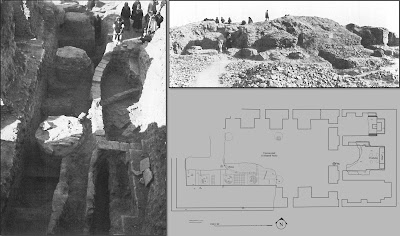 Saturday, November 23 at 11am in the John B. Davis Lecture Hall in the Ruth Stricker Dayton Campus Center at Macalester College.

Using previously unpublished site plans and field notes from the 1929/1930 German Oriental Society excavations of the expansive Sasanian era urban complex of al-Madāʾin, this paper sheds new light on the little understood church at the so-called Qasr bint al-Qadi in Wēh-Ardašīr, Iraq. A close analysis of these documents allows for a reinterpretation of the chronological horizons of this church in the Sasanian capital and connects it to the wider iconographic and architectural exchange between Christians, Zoroastrians, and the Sasanian aristocracy in late antiquity. As one of the few churches in the Sasanian empire to be properly excavated, the knowledge derived from these source documents is critical to our understanding of the dynamics of religio-cultural exchange in the late antique world.

Johnathan Hardy is a doctoral student in the Department of Art History at the University of Minnesota – Twin Cities. His dissertation focuses on the dynamic discourses of power and prestige between Christians, Zoroastrians, and the Sasanian aristocracy in late antiquity.

This event is free and open to the public; co-sponsored by the Macalester Anthropology
Department and the Archaeological Institute of America.

Posted by AIA Minnesota at 5:06 PM No comments:

Pamela Gaber on “Limestone Sculpture of Cyprus: Portraits of a Culture” 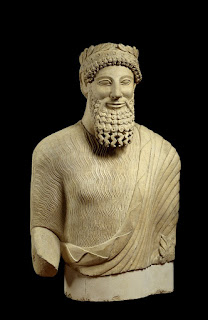 Saturday, October 26, 2019 at 11am in the Pillsbury Auditorium at the Minneapolis Institute of Art


The island of Cyprus in the eastern Mediterranean has yielded hundreds of votive sculptures from the first millennium BCE. A study of these sculptures reveals information about religious worship in the Ancient Near East. Also, a detailed examination of these collections can tell us about trade relations and travel, not only between sites on Cyprus, but between Cyprus and the Levant. Such an examination reveals chronological sequences and even hints about the nature of worship in ancient Near East, including Israel. Subsequent studies have even aided scholars to discern the hands of individual sculptors.
Dr. Pamela Gaber, Professor of Archaeology and Religion at Lycoming College, is a world-renowned expert in sculpture typology and pottery chronology (the tracking of the development of pottery types) and director of archaeological field school in Cyprus. Gaber is the author of Idalion III: Excavations on the Terrace of the East Acropolis and a children’s book, Daily Life in Bible Times: What Archaeology Tells Us.


Co-presented by the Minneapolis Institute of Arts.
Archaeological Institute of America members may join the speaker after the talk for a no-host lunch at Christo's Greek Restaurant
Posted by AIA Minnesota at 6:27 AM No comments: