"From Mystery to History: The Garamantes of the Libyan Sahara"
Dr. David Mattingly
University of Leicester

Please note that this lecture will take place on Wednesday, not Thursday!

AIA National Lecturer Professor David Mattingly specializes in Roman archaeology (including Africa and Britain), landscape archaeology, and Saharan archaeology. He has directed excavations in Italy, Tunisia, Jordan and Libya and is currently the director of the Desert Migrations Project, in Libya. 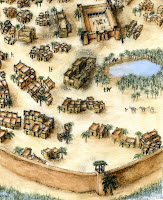 aran heritage of Libya. The Garamantes of Libya’s southern desert province have long been a topic of interest, but much about their lifestyle, their culture and their place in history has hitherto been shrouded in mystery. The lecture will review the Greco-Roman literary and historical sources that depict the Garamantes as troublesome nomads and contrast that with dramatic new evidence from my excavations and survey deep in the Sahara to suggest that the ancient reality was both dramatically different and more complex. The Garamantes can now be recognized as a Saharan civilization contemporary with the Greco-Roman era (900 B.C. – A.D. 500). In fact, their kingdom was the first Libyan state, marking the moment when the indigenous people of Libya evolved from tribal organization to the greater complexity of a centralized polity. Their rule over a Saharan ‘empire’ introduced a series of major innovations to desert societies, including irrigated agriculture, writing, the horse and the camel, urbanism, metallurgy and so on.

Dinner at Shish Restaurant on Grand Ave will follow. We look forward to seeing you!
Posted by Kate at 7:04 AM