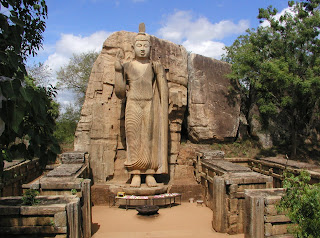 The island of Sri Lanka has been known by many names throughout its history: Ratnadipa, or the 'land of gems' in Buddhist Sanskrit literature, Taprobane among Greeks and Romans, Serendib to the Arabs, and Ceylon under the British Empire. This small island, only 25,000 square miles in size, lies off the southern tip of India. Early Iron Age culture was introduced to the island, presumably from South India, at the beginning of the First Millennium B.C., but few sites of this period are known, except for cemeteries with megalithic graves. Archaeological work in Sri Lanka has concentrated instead on large monastic settlements which were established in the Early Historic Period, ca. 300 B.C. - 300 A.D. and mark the spread of Buddhist influence over the island. Little attention has been paid to secular sites, nor have the lower levels of most monastic sites been probed to determine the nature of earlier occupation. Also neglected have been the remains of Hindu, Islamic and Christian sites and structures. The challenge that lies ahead for the next generation of Sri Lankan archaeologists is the investigation of sites and regions that will provide a broader and more balanced picture of the island’s past.

Thursday, March 3, 2011 at 6pm in the John B. Davis Lecture Hall in the Ruth Stricker Dayton Campus Center at Macalester College.

About the speaker: Nancy C. Wilkie is the William H. Laird Professor of Classics, Anthropology and the Liberal Arts at Carleton College. She received her M.A. and Ph.D. in Greek from the University of Minnesota, and her B.A. in Classics from Stanford University. Her areas of specialization are prehistoric Greece, Nepal, and Sri Lanka, and cultural property issues. Since 2003 she has served as a member of the Cultural Property Advisory Committee with the U.S. Department of State. Her main publications include “Governmental Agencies and the Protection of Cultural Property in Times of War” (in Antiquities Under Siege. Cultural Heritage Protection After the Iraq War, L. Rothfield ed., 2008). Professor Wilkie is Past-President of the AIA, and was an AIA Norton Lecturer in 2009/2010.
Posted by Vanessa Rousseau at 10:21 AM