Bob Brier on “Secret of the Great Pyramid: How one man’s obsession may have led to solving one of the greatest archaeological mysteries of our time" 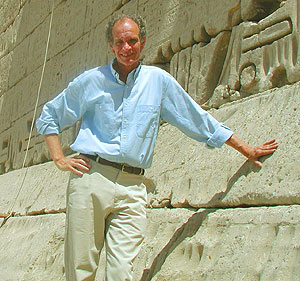 Saturday, September 29, 2012 at 11am in the Pillsbury Auditorium at the Minneapolis Institute of Arts

The Great Pyramid of Giza is one of the unsolved mysteries of all time. Egyptologists simply do not know how ancient builders raised thousands of 2-ton blocks to the top of a 480-foot pyramid. This lecture presents a radical new theory and the recently discovered evidence for it.

For years, French architect Jean Pierre Houdin worked in isolation in a one-room flat in Paris with nothing but his computer and the most detailed blueprints of the Pyramid ever drawn. In 2003 he contacted Egyptologist Bob Brier and the two began working together to find evidence for his theory – that hidden inside the pyramid is a mile-long ramp that is still there, waiting to be discovered. In the course of their explorations in Egypt, they uncovered a room 275 feet up the pyramid never mentioned in Egyptological literature. Recently, Houdin, working with Dassault Systemes in Paris, was also able to demonstrate that the Great Pyramid cracked as it was being built and pinpoint precisely when and why.

This illustrated lecture presents the new internal ramp theory and the evidence for it, including the first photographs of the room high up on the Pyramid’s NE corner. This research was the subject of a recent National Geographic Channel TV special

About the Speaker:
Dr. Bob Brier is the AIA’s Norton Lecturer and has worked in Egypt for more than 30 years, and is one of the world’s foremost authorities on mummies. He is Senior Research Fellow at the C.W. Post Campus of Long Island University. He is the author of numerous books, including Secrets of the Great Pyramid (2008) and The Murder of Tutankhamen (1998), and he has collaborated on several television specials and series, including “Mummy Detective” and “Unwrapped, the Mysterious World of Mummies.”

A no-host lunch with the speaker will follow the lecture at Christos Greek Restaurant, 2632 Nicollet Avenue, Minneapolis

Posted by Vanessa Rousseau at 10:50 AM