Alex Knodell on “Crossroads and Boundaries in an Ancient Greek Borderland: Regional Survey with the Mazi Archaeological Project” 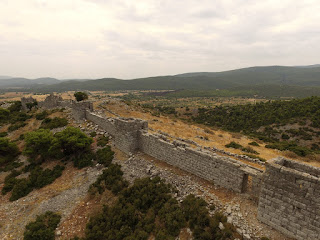 The Mazi Archaeological Project (MAP) is a diachronic regional survey of the Mazi Plain, located in the Kithairon mountain range of northwest Attica, Greece. This area is characterized by its rich agricultural land and its critical location on a major land route between two of the most historically significant regions in Greece: Attica and Boeotia. Territorial disputes in this borderland are attested from the Late Archaic period (Herodotos 5.74.2) and region has marked importance for the study of Attic- Boeotian topography, mythology, and religion – especially at the sites of Oinoe (the outermost Attic Deme site) and Eleutherai (one of the best examples of fortress architecture in all of Greece). Our approach to regional history also extends well beyond the Classical past to include prehistoric precursors, as well as the later history of this part of Greece. An initial field season took place in 2014, followed by a larger-scale effort in 2015. This lecture examines some of our survey results, which shed new light on the long-term history of this crossroads and borderland from prehistory to the present.


About the speaker: Alex Knodell (pronounced no-DELL) is an assistant professor in the Classics department at Carleton College, where he also co-directs the undergraduate archaeology program. His research focuses on archaeological approaches to landscapes and interaction in the ancient Mediterranean and Middle East, especially Greece and Jordan.  His PhD dissertation from Brown University examined network-driven approaches to social change in the Euboean Gulf in the Late Bronze Age and Early Iron Age, a project he is currently working on turning into a book.  Alex also co-directs the Mazi Archaeological Project, located in northwest Attica, Greece, which is a regional survey project and an international collaboration between Greek, Swiss, and American archaeologists.

AIA members may join the speaker for a no-host meal following the talk at Pad Thai Grand.

Posted by AIA Minnesota at 5:18 AM