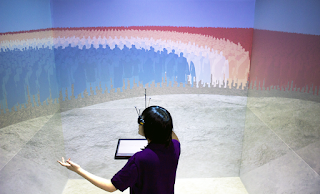 The Pnyx site in Athens is of enormous historical importance; it is widely regarded as the birthplace of democracy, but despite decades of intensive study, many fundamental features of the site remain in dispute. How many audience members could attend meetings and what would it feel like to speak to 6,000 audience members (a quorum) or more? What demands does the structure itself make on the speaker to be seen, heard, and understood, and on auditors to see, hear, and understand? We will discuss a digital liberal arts collaboration between computer scientists and a scholar of Greek rhetoric pioneering the use of virtual reality and computational tools for experiential analysis of oratorical performance venues.

Dr. Graff’s current research considers the theories of prose style presented in the rhetorical treatises of ancient Greece and Rome.  He is especially interested in the ways early theories of style reflect or respond to circumstances of oratorical performance and textual production in classical antiquity.  His articles on this subject have appeared in Rhetorica, Rhetoric Society Quarterly, and Advances in the History of Rhetoric.  He has also published essays on evolving historiographies of rhetoric and on the rhetorical theory of Chaim Perelman, and is co-editor of The Viability of the Rhetorical Tradition.
He is a past president of the American Society for the History of Rhetoric (ASHR) and serves as referee for several journals in rhetorical studies. He has held a University of Minnesota McKnight Summer Research Fellowship and been a visiting Senior Associate Member of the American School of Classical Studies in Athens, Greece. Dr. Graff is an Associate Professor in the Department of Writing Studies and teaches graduate courses and seminars in Classical Rhetoric, Modern Rhetorical Theory, and Rhetorical Stylistics. He is recipient of the College of Agricultural, Food and Environmental Sciences’ (now CFANS) Distinguished Teaching Award.
http://www.tc.umn.edu/~graff013/

AIA members may join the speaker for a no-host meal following the talk.

Posted by AIA Minnesota at 1:46 PM