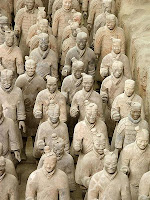 Thursday, November 20th, Winston Kyan will offer a lecture titled Unearthing the Emperor: Person, Personality and the Terracotta Army of China's First Sovereign Ruler. The accidental discovery in 1974 of the terracotta army of Qin Shihuangdi, the First Emperor of China, astonished the archaeological world. In the decades since, the international celebrity of these 7000 life-sized warriors, horses, and chariots has only grown while the actual mausoleum of the First Emperor remains untouched. Based on the material from the latest excavations at the site - including bronzes, jades, and figural sculpture - this lecture reconstructs the social, political, and religious context that illuminate the person and personality of this remarkable individual.

Dr Kyan is an Assistant Professor of Art History at Macalester College. He received a PhD in Art History from the University of Chicago. The lecture will begin at 6:00 in the John B. Davis Auditorium, in the basement of the Dayton Campus Center, located on the southwest corner of the Snelling and Grand intersection in St Paul.
Posted by Kate at 10:59 AM