Investigations of a Roman Villa

The site of Soline, the archaeological project of St. Thomas professor Vanca Schrunk, is featured in the Spring AIA-MN newsletter (coming soon to your inbox or mailbox!). Below is an article about the site which was originally published in the August 2008 edition of Nautica, a Croatian language periodical. Thanks to Vanca for providing the article and photos.

When a Legionnaire Falls in Love with Hvar
Text by M. Petrić
Photos by T. Schrunk, M. Petrić and N. Colnago
Translated by V. Schrunk

On the island of St. Clement (Sv. Klement), the largest of the Pakleni archipelago, archaeologists investigate the remains of a Roman villa, 1500-2000 years old

In Soline Bay, in the central part of St. Clement and on the edge of a fertile plain (Velo Poje), are located remains of a Roman villa. Croatian and American archaeologists have been exploring the site for two years. The story of this villa could begin in this way: When the Roman officer Lucius Rustius Picens came to Hvar with his army in the middle of the first century A.D. to counter the strife following the rebellion of Scribonianus, the provincial governor of Dalmatia, against Emperor Caligula, he could not have guessed that he would fall in love with Hvar and remain here. For his successful service to the Empire, the emperor rewarded him with a title (evidence on an inscription found in Hvar in 1884) and gave him land in Hvar and on St. Clement. Rustius especially liked his estate on the small island. The fertile field he planted in wheat, the shallow bay was ideal for salt works and fish ponds, and at the head of the bay he built his residence to supervise the work and enjoy the scenery. In his old age he could treat his ailing joints in the medicinal mud in the bay. His descendants continued to keep up the estate until the hard times when the Slavs and the Avars poured over the borders of the Empire. Many Romans from the coastal cities (especially from Salona, by then called Romani) took refuge on the islands. Several families arrived on St. Clement. They built additions and secured the old villa, expanded the salt works, constructed a watch tower. It didn't last long and they had to flee. The newcomers did not care about the villa or about the field; they kept up only the salt works. So the villa deteriorated and sunk into oblivion and thick vegetation ..... for centuries. Sometime in the 13th century, on a hill above the field, an unknown Croatian aristocrat built a chapel to St. Clement (a martyr and a pope), the patron of sailors and shepherds. When the times were more peaceful in the 15th century, a small shepherd village Vloka formed on the slopes below the chapel. Rustius' villa became a mine for building stones. One of the structures with a mosaic floor became a sheep-pen; its entry way was converted to a wheat-threshing space. 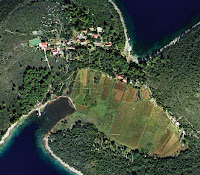 Shepherds, farmers and fishermen, beside salt collectors and hunters of small game used the villa ruins until the 20th century. Then in the late 1950's, the devastated ruin attracted a well-known archaeologist from Hvar, Grga Novak, who conducted a small excavation, but left no documentation. There is only one sentence about it in his book "Hvar through centuries" and an oral anecdote about a Roman coin he found and gave to a pretty woman – visitor to his excavation.

This romantic story of the site could be told to tourists who venture into this picturesque bay and stop at the ruins. But, what could really be the history of this site? What could scientific archaeological research tell us by analyzing stratigraphy, pottery and ancient pollen; by conducting magnetometric detection and C 14 dating of organic remains? To find 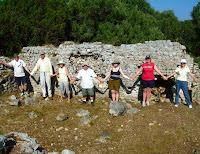 answers to these questions, a Croatian-American team started a project called "Soline". Its director is Branko Kirigin from the Archaeological Museum in Split and the team members are Vlasta Begović from the Institute of Archaeology in Zagreb, Ivančica Schrunk from the University of St. Thomas in St. Paul (USA) and Marinko Petrić from the Hvar Heritage Museum, the institution that carries the project. The main financial sponsor of the project is the Archaeo/Community Foundation from San Francisco. The field workers are students and volunteers, mostly from the USA so far, but Croatian participants are expected soon and there are plans for a summer archaeological field school. The field team is housed in Vloka at Tonko Matijević and the family Colnago, some hundred meters from the site in the beautiful surroundings of the bay – indeed an ideal place for active and educational vacation.

The hot summer sun dictates the field work in the early morning and late afternoon hours. In the meantime, the team washes and catalogues ceramic finds, swims, and eats lunch in the restaurant Dionis, owned by the brothers Šimunović, also project sponsors. At night, the host sings and plays guitar – "just two songs before sleeping" .....but that could go on!

The small funds so far allow only short seasons – 10 to 15 days – and the research is exploratory and diagnostic. The objective is to define the site: the villa's area and layout, building phases and concentration of finds. These would indicate the direction of the project and formulate the plan of research, conservation and site presentation.

Last summer, David Monsees from Washington, DC, conducted magnetometric survey of the northwestern area, which showed many structures under the surface. A test tre

nch confirmed architectural remains and there were findings of mosaic stones (tesserae) and of pottery shards ranging in date from the Hellenistc to the Renaissance period. This year, the team researched the late Roman standing structure with thick walls, which could have been a granary. However, when the interior was explored, remains of a mosaic floor were found. The structure had on its north side an apparently later addition of unknown function. The whole complex first had to be cleared of trees and thick brush, what was the most laborious part of the fieldwork. The effort, however, uncovered the building in its full size and location in the landscape.

Next year, the exploration will continue, but in the meantime, the site will be protected as a cultural-historical heritage site and identified as such by a sign posted in the bay. All in all – much more work, hot sun, and songs by Tonko Matijević.

It Was A Villa Maritima

The Roman villa rustica in Soline Bay is located along the southwestern edge of the fertile plain (Velo poje) and along the shore of the bay, what makes it a maritime villa (villa maritima). It covers 2000-2500 square meters, today mainly overgrown with brush and tall grass. The remains of a long wall (A), 16 m in length and 2.5 m high, dominate the site. The wall probably belonged to a two-story building. About 20 m to the south is a relatively well preserved structure (B), 8 m long and 6 m wide, with walls from 1.5 to 2m high. It has a mortar floor base preserved in its interior and there are remains of more walls, enclosing narrow spaces, next to it. Along the shore there are sections of other walls and remains of structures (C), which all seem to belong to an older, residential section of the villa. These were uncovered in the late 1950's by Grga Novak, the well-known archaeologist and historian from Hvar. A Roman retaining wall runs at the head of the bay along the sandy beach. It probably served to prevent erosion of the fields. Large stone blocks, visible scattered in the shallow bay, are the remains of ancient piers. All the standing structures show the late Roman wall construction of the 5th or 6th century, while the entire site is littered with fragments of roof tiles and pottery shards, which could be dated from the 3rd and 2nd century B.C. to the 16th and 17th centuries A.D. The majority of the surface finds belongs to late antiquity, from the 4th to the 6th century, what indicates the period of the largest extent of the villa complex. Roman pottery has been found in the wider area of the bay and the village of Vloka and more Roman structures could be found. Considering the preserved architecture and the chronology of its use, the villa in Soline is the best example of the Roman rural settlement in the Hvar area and the site of exceptional archaeological potential. There are traces of two other Roman villas on the archipelago near Hvar: one in the bay of Ždrilce on the islet of Marinkovac, and the other on the edge of the Momić field, west of Soline.

Soline - Archaeological Park
The Hvar archipelago (Hvarski škoji), better known as the Pakleni Islands, are one of the most scenic Mediterranean areas of Croatia, and thus have the status of protected landscape. Because of their serene atmosphere, quiet and sunny coves, crystal-clear sea for swimming and diving, and some good restaurants, the islands are very popular with tourists. These islands also have a very rich history, from most ancient times to the 20th century. Soline bay and Vloka, with a Roman villa and the chapel of St. Clement in a picturesque village, and also prehistoric Illyrian grave-sites (gomile) on the nearby hills, offer the most interesting story. The guiding idea of the project has been from the very beginning to connect tourism with the cultural-historical heritage of the islands. The best solution would be an archaeological park on the site of a well researched and presented Roman villa (Rustius' villa?). Here the visitors could learn about the history of the archipelago, Roman rural architecture and lifestyle, Roman agricultural practice .... and perhaps taste some Roman delicacies and experience the medicinal mud in the bay. This would show the value of the cultural heritage of the Hvar archipelago and be attractive to tourists. Despite the rich archaeological literature about the city of Hvar, there is not a single archaeological site that is properly presented. The research project in Soline and the plans for the site presentation will require years of work, but the prospects are great because of lots of good will, efforts and support from the local community and from the hotel company Sunčani Hvar, who recognized its potential for the new, refined tourist image of Hvar.
Posted by Kate at 11:37 AM