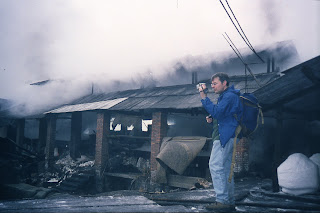 New Light on the First Archaeological Discovery of Chinese Bronzes

On Saturday, October 31st, Dr. Lothar von Falkenhausen comes to the Minneapolis Art Museum from the Cotsen Institute of Archaeology at UCLA to speak about his work on an assemblage of bronzes excavated at Xinzheng, China, in 1923. This lecture is co-sponsored by Macalester College and the University of St. Thomas. The lecture will take place in the Pillsbury Auditorium at 11:00 AM and will be followed an informal lunch with the speaker at Christos Restaurant.

Dr. von Falkenhausen is Professor of Chinese Archaeology and Art History and Associate Director of the Cotsen Institute of Archaeology at UCLA, where he has taught since 1993. His specialty is East Asian archaeology, with an emphasis on the great Bronze Age of China (ca. 2000-200 BC). He obtained an MA in East Asian Studies (1982) and a PhD in anthropology (1988) from Harvard University; he also attended the University of Bonn (1977-79), Peking University (1979-81), and Kyôto University (1984-86). Before joining the faculty at UCLA, Professor von Falkenhausen taught at Stanford University and the University of California, Riverside. He has, moreover, held visiting professorships at numerous institutions in Europe and Asia. He has published more than one hundred articles, books, reviews, and edited volumes; the two most important being two books, Suspended Music: Chime Bells in the Culture of Bronze Age China (1993) and Chinese Society in the Age of Confucius (1000-250 BC): The Archaeological Evidence (2006). Since 1999, he has served as the American co-Principal Investigator of UCLA's joint field project with Peking University, entitled “Landscape Archaeology and Ancient Salt Production in the Upper Yangzi River Basin” and as co-editor of the bilingual series Salt Archaeology in China (2006-). He is also the founding co-editor of the Journal of East Asian Archaeology (1999-).