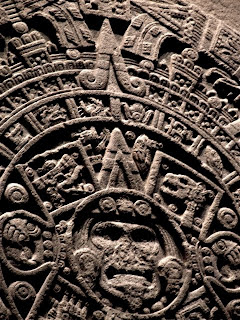 At 6:00 PM on December 10th, Dr. William L. Barnes of the University of St. Thomas will will speak at the John B. Davis Lecture Hall in the Dayton Campus Center at Macalester College on the topic of the Aztec calendar and its relation to the Aztec empire with its imperial center at Tenochtitlan. There will be an informal dinner afterward at Pad Thai Grand Café.

Dr. Barnes's primary area of research is the art of ancient Mexico, with a focus on Central Mexican sculpture and Mesoamerican manuscript painting. His current research focuses on discursive strategies used in Aztec (Tenochca Mexica) imperial art and the extend to which the Mesoamerican calendar was used in royal monuments. William's other areas of interest include Early Colonial Latin American and Pre-Columbian Andean art and architecture.