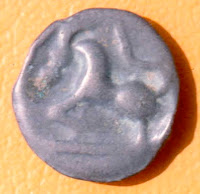 Meanings in Early Celtic Art
At 6:00 PM on February 4th, Professor Peter S. Wells of the University of Minnesota will speak at the John B. Davis Lecture Hall in the Dayton Campus Center at Macalester College:
Celtic art, developed around 500 BC, is dominated by striking images of human and animal faces and figures, with elements often combined to form strange imaginary creatures. This style became the basis not only for the later Celtic art of the British Isles, but also for the art styles of much of medieval Europe. A new approach to this art, and especially to the decorative details that cover many of the ornate objects, focuses on understanding how early Europeans responded to Celtic art and what the different images and designs meant to them.
There will be an informal dinner afterward at Pad Thai Grand Café.

Professor Peter S. Wells is with the Department of Anthropology at the University of Minnesota. He received his degrees from the University of Tübingen and Harvard (Ph.D.), and specializes in European archaeology, especially of the Bronze & Iron Ages, the Roman Period, and the early medieval period. Dr. Wells has done extensive fieldwork in Germany and his recent main publications include “Barbarians to Angels: The Dark Ages Reconsidered” (W.W. Norton, 2008) and “Image and Response in Early Europe” (2008, Duckworth). He is an active member of the AIA, and past-president of the Minneapolis-St. Paul Society.
Posted by Vanessa Rousseau at 5:20 PM