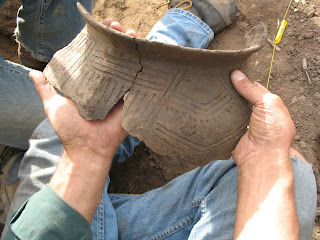 When professional archeologists first began studying large villages in Red Wing, Minnesota, they immediately focused on what they perceived to be connections with Middle Mississippian cultures to the south. An entire literature proceeded from this focus, with surprisingly little critical assessment of its accuracy. Such critical assessment has finally been levelled at the area through further study in the field and the lab, indicating that the area is both temporally and culturally much more complicated than previously believed.

Dr. Schirmer is an Associate Professor of Anthropology at Minnesota State University, Mankato. He completed his Ph.D. in Archaeology in 2002 at the University of Minnesota, with a doctoral minor in Quaternary Paleoecology.
Ron’s research focuses on examining the interrelationships between people and the environment, especially as those relationships become characteristic in specific cultures and then are used as markers of identity when different groups of people interact with each other. He researches throughout the southern half of Minnesota, with foci in the Mississippi and Blue Earth valleys. In addition, he works with several Native American groups in Minnesota and Wisconsin on archaeological site preservation and community outreach to give descendent communities greater voices in research and preservation.
Posted by Vanessa Rousseau at 10:07 AM