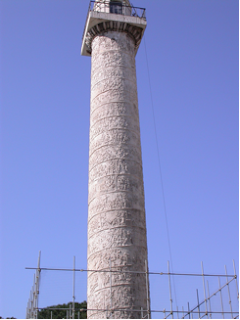 Trajan's Column is best known for its sculpted spiral frieze depicting Trajan's victories in the Dacian Wars (101-106 AD), but it was also a great technological achievement requiring a great deal of site organization. The blocks making up the Column of Trajan are among the heaviest to have been lifted during the Roman Imperial period (the largest of which weighed as much as 77 tons). In this talk I examine the evidence for how the blocks were quarried, transported to the site, and then lifted into place. I also propose a hypothetical reconstruction of the lifting tower used to raise the blocks. The proposal is based on archaeological evidence from the site itself and from other Roman sites, on literary evidence from technical writers such as Vitruvius and Hero of Alexandria, and lastly on a comparative analysis of the way in which Domenico Fontana lifted the Vatican obelisk in 1586.

About the speaker:
Professor Lynne Lancaster is Associate Professor with the Department of Classics and World Religions at Ohio University, Athens. She holds her degrees from Virginia Polytechnic Institute and State University (B.A. in architecture), Lincoln College (M.A. in Classical Archaeology), and Wolfson College, Oxford University (Ph.D. in Classical Archaeology). Her interests include Roman architecture, construction and technology and she has worked on many of the standing structures in Rome including Trajan’s Markets and the Colosseum, and as architectural consultant at various locations in Italy. She has published extensively, and her Concrete Vaulted Construction in Imperial Rome: Innovation in Context (Cambridge University Press, 2005) received the AIA’s 2007 James R. Wiseman Book Award. Professor Lancaster is AIA Joukowsky Lecturer for 2010/2011
Posted by Vanessa Rousseau at 10:33 AM