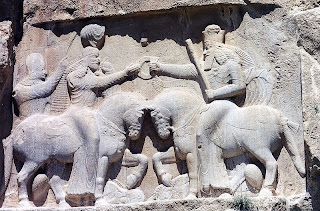 Synopsis
This talk analyzes the techniques by which the kings of the early Sasanian dynasty engaged the past. I concentrate on the innovations and legacy of the first two kings of kings of the dynasty, Ardaxshīr I (r. 224-242 C.E.) and his son Shābuhr I (240-270 C.E.). In concert with their military activities, these sovereigns fashioned a new and politically useful vision of the past to establish their dynasty’s primacy in Persia and the wider Iranian world, eclipsing their Hellenistic, Fratarakid and Arsacid predecessors. I identify and examine the artistic, architectural and ritual means by which the early Sasanians conformed the built and natural environment of their homeland to their grand new vision of the past. I argue that the Achaemenid patrimony of the province of Pārs played an especially important role in these efforts, serving both as inspirations and anchors for the Sasanians’ new creations.

This lecture will be held at the John B. Davis Lecture Hall in the Ruth Stricker Dayton Campus Center at Macalester College, with dinner to follow at Pad Thai Grand (1681 Grand Ave.)

About the Speaker: Matthew Canepa is Assistant Professor in the Department of Art History at the University of Minnesota, Twin Cities campus

Professor Canepa (Ph.D. University of Chicago) is intrigued by topics of cross-cultural interaction in pre-modern visual cultures. His research tends to focus on the intersection of art, ritual and power in the Mediterranean and ancient Iran. His first book, entitled The Two Eyes of the Earth (University of California Press, 2009), is the first to analyze the artistic, ritual and ideological interactions between the Roman and Sasanian empires in a comprehensive and theoretically rigorous manner. Recent publications include an edited volume that studies the phenomena of cross-cultural interaction between the Mediterranean, Iran, and China, a study of the art and ritual of late antique diplomatic exchange, an article on the recreation of Persian monuments and identity in the Sasanian period, and an examination of the impact of Achaemenid and Seleukid practices on Middle Iranian royal funerary monuments and associated rituals. He is writing a book exploring the transformation of Iranian art and kingship between the invasions of Alexander and Islam and is currently serving as an area advisor/editor for the planned Oxford Dictionary of Late Antiquity.

Professor Canepa is a Fellow the Society of Antiquaries of London, and has been the recipient of numerous research grants including the Council of American Overseas Research Centers (2002-2003), the Deutsches Archäologisches Institut (2007), the Archaeological Institute of America (2008) and a Charles A. Ryskamp Research Fellowship from the American Council of Learned Societies (2009-2010). In fall 2009 he was invited to be the Michaelmas Term Visiting Research Fellow at Merton College, University of Oxford. Before joining the Department of Art History at UMN in 2010, Prof. Canepa taught at the College of Charleston for five years.
Posted by Vanessa Rousseau at 12:45 PM