Amy McNair on The Intrusive Gift: the Marble Guardsmen in the Tomb of a Tang-dynasty Court Eunuch 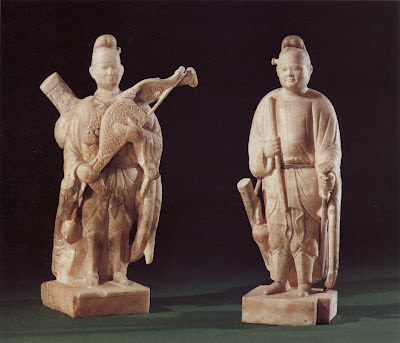 Saturday, April 28, 2012 at 11am, in the John B. Davis Lecture Hall in the Ruth Stricker Dayton Campus Center at Macalester College

Two remarkably lifelike marble figures of imperial guardsmen were found during the 1958 excavation of the tomb of a court eunuch bodyguard Yang Sixu (654–740) in the ancient Chinese capital of Xi’an. Their extraordinary placement would appear to have been a gift of mourning from his lord, the Tang-dynasty Emperor Xuanzong (r. 712–756). Yet it would appear that the reciprocity compelled by this gift was eternal servitude in the afterlife. I argue that since Yang’s own sponsorship of sculpture projects was intended to earn karmic merit toward rebirth in Amitābha’s Pure Land for his late parents and for himself as an intact male, the emperor’s gift may instead be seen as counter to Yang’s filial goals for his next incarnation; hence, I term it an ‘intrusive gift.’

About the speaker: Amy McNair is Professor of Chinese Art History at the University of Kansas and Editor-in-chief of Artibus Asiae. Her research interests encompass the study of patronage and politics in the art of medieval China, especially calligraphy and Buddhist sculpture. Recent publications include Donors of Longmen: Faith, Politics, and Patronage in Medieval Chinese Buddhist Sculpture (Honolulu: University of Hawai’i Press, 2007) and “Looking at Chinese Calligraphy: The Anxiety of Anonymity and Calligraphy from the Periphery,” in Looking at Asian Art (Chicago: Paragon Press, 2012), which is a preliminary study of the Cuan Baozi stele of 405. She is currently engaged in a translation of Xuanhe huapu, the catalogue of the Song-dynasty imperial painting collection circa 1120.