Maria Liston on Murder in the Agora: Violent Death and Illicit Burial in Ancient Athens 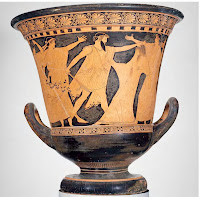 Saturday, March 31, 2012 at 11am in the Pillsbury Auditorium at the Minneapolis Institute of Arts

Lecture Summary: Violent crime and homicides are not a problem limited to the modern world alone, and the ancient city of Athens experienced similar events throughout antiquity. A recent study of all the human skeletons found in wells excavated by the American Excavations in the Athenian Agora has found that many of these individuals died violently. Some of the dead, including women and children, appear to be associated with the sack of Athens by the Herulians, a Gothic tribe who invaded Greece in AD 267. Other skeletons, found in wells ranging in date from the Neolithic to late antiquity, appear to be victims of individual attacks. These skeletons exhibit multiple indications of trauma, and appear to be murder victims hidden in the depths of wells, presumably conveniently located near the scene of the crime. This lecture examines the evidence for these ancient “cold case” crimes in Ancient Athens.

Excavations in the Athenian Agora: http://www.agathe.gr/

About the speaker: Maria Liston, Associate Professor and Chair of the Anthropology department, received her BA in Classics from King College in Bristol, Tennessee and her MA in Classics from Indiana University. She then completed a BA and Ph.D in Anthropology from the University of Tennessee. Dr. Liston pursues research as a skeletal biologist and archaeologist, focusing on the excavation and analysis of human remains and their mortuary contexts. Since 1987 she has worked as the skeletal biologist for the Iron Age excavations at Kavousi, Crete, and various other projects in Crete. Since 2002 she has been participating in the excavation of the Iron Age site of Azoria in Crete. She also has directed the analysis of the remains of previously recovered British and colonial soldiers at Fort William Henry, in New York, and in 1996 conducted the first excavations at the fort in over 30 years. She involves students in research and overseas study projects whenever possible.

No-host lunch with the speaker will follow the lecture at Christo's Restaurant, 2632 Nicollet Ave., Minneapolis
Posted by Vanessa Rousseau at 2:34 PM