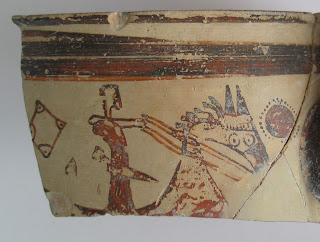 Thursday, March 1 at 6pm in the John B. Davis Lecture Hall in the Ruth Stricker Dayton Campus Center at Macalester College

Lecture Summary: In the Late Bronze Age, the eastern Mediterranean and Near Eastern regions sustained an intense trading network focusing primarily – but not only – on prestige goods. Such a widely developed system left tangible traces in the archaeological records, from goods to ancient texts. The level of exchange is especially visible in the archaeological records, through the frequency and wide distribution of specific artefacts such as pottery, and of prestige objects such as ivory, gold and faience. The major powers of the time (Egypt, Hatti, Mitanni and Babylon) had intense relationships marked by a frequent exchange of official and/or diplomatic letters. These letters preserved in royal or official archives dealt with gift exchanges, weddings, policy, and were not only exchanged between the major players, but also between them and their vassals. Beside the large Empires, participating regions included Cyprus, the Aegean, and the city-states of the Levantine coast. Amongst these city-states, Ugarit on the northern Syrian coast occupied a strategic position, experienced a great prosperity and played a key role on the international scene. Through the archaeological and textual discoveries made at this site, I will explore the various facets of the Late Bronze Age trade.

About the speaker: Dr. Sauvage earned her Ph.D. (2006) at Université Lumière Lyon (France), where she studied Near Eastern Archaeology and Egyptology. Her dissertation focused on Late Bronze Age maritime exchange in the eastern Mediterranean, and will be published by the Maison de l’Orient et de la Méditerranée Press (Routes maritimes et systèmes d’échangesinternationaux au Bronze récent en Méditerranée orientale). Between 2007 and 2010 she conducted research on the status of objects and their representations in the Near East and eastern Mediterranean area as a whole as a post-doctoral fellow at the University of California at Berkeley (on chariots in collaboration with professor Marian Feldman – published in Egypt and the Levant XX) and as a Visiting Research Scholar at the Institute for the Study of the Ancient World, New York University (on ships 2009-2010). She has been teaching as a Visiting Assistant Professor at the Institute for the Study of the Ancient World at New York University in 2010-2011. From 2008, she has been the recipient of a Shelby White – Leon Levy grant for archaeological publication. This work concerns the publication of the material preserved in the archaeological museum of Saint-Germain-en-Laye (France) and excavated by C.F.A. Schaeffer at Minet el-Beida and Ugarit during the first years of work there. She is currently a Visiting Scholar at Macalester College. Her main research interests include trade and exchange systems in the eastern Mediterranean during the Late Bronze and early Iron Ages, as well as the definition of social identities and groups over large areas, through archaeological objects and their iconography to avoid the classic pitfalls of disciplinary partitioning. She has conducted fieldwork in Syria, Egypt, Cyprus, France, and Italy, where she has worked on sites ranging from the Neolithic to the Late Roman periods. She is a member of the American School of Oriental Research, the Centre d’Études Chypriotes (Paris) and the Cercle d’Égyptologie Victor Loret (Lyon) and was awarded several fellowships and awards including a young researcher award from the town of Lyon (2007), and the prix Louis de Clercq (2011) from the Académie des Inscriptions et Belles Lettres (Paris).