Jeff Pearson on The Nabataean Achievement at Petra 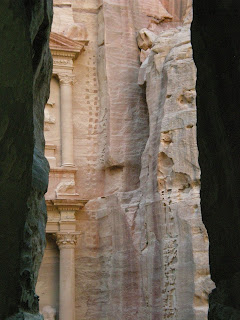 Thursday, February 2, 2011 at 6pm in the John B. Davis Lecture Hall in the Ruth Stricker Dayton Campus Center at Macalester College

Lecture Summary: After languishing for centuries in obscurity, the archaeological ruins of Petra have become much better known in recent years, thanks to popularization by the movies, UNESCO World Heritage Site designation, and (relatively) favorable political conditions in Jordan. Nevertheless, the Nabataean people, who were responsible for building the spectacular monuments we see today at Petra, remain under-examined and little understood, although their remarkable civilization flourished in the Near East for over four hundred years. Long in control of the routes by which incense and spices were moved to Mediterranean markets and persistently defying the efforts of other great empires to subdue them, they engineered a capital whose monuments captured much of the best of international fashions yet remained uniquely Nabataean in both spirit and function. This lecture will provide an introduction to this enduring legacy at Petra, while also setting the enigmatic Nabataeans and their cultural achievements within a broader historical context.

About the speaker: Dr. Pearson is a visiting assistant professor in the Department of Classics for the 2011-2012 academic year. His current research focuses on the civilization of the Nabataeans, best known for the remains of their capital city at Petra in Jordan. As an archaeologist, he has worked as a supervisor at sites in Egypt, Israel, and Jordan. While at Macalester, Pearson will be teaching Latin I and II, the Roman World, Introduction to Archaeology, and a research seminar on Greco-Roman Egypt.